On set with Lars von Trier 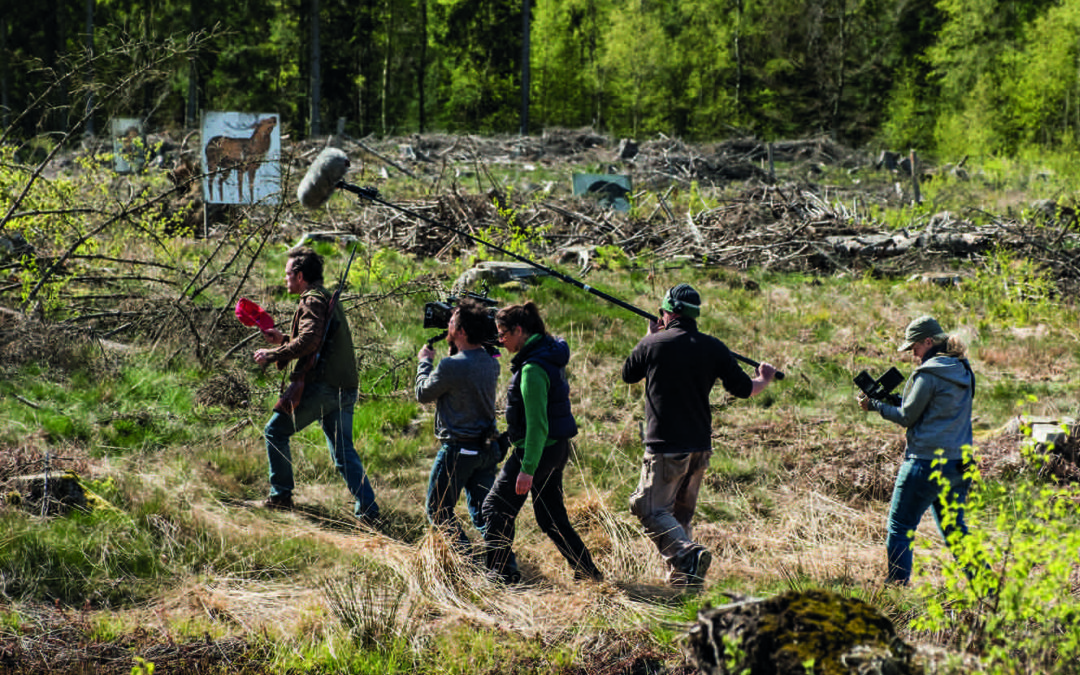 After 17 years abroad, Lars von Trier is back in Copenhagen with the production of his new film THE HOUSE THAT JACK BUILT. Get the plus sides of filming in Denmark from his Danish costume designer through 37 years here

Matt Dillon’s hand rests on the little boy’s shoulder as they walk through a forest clearing. Their clothes are suttle but distinct for that time. The boy’s blue jeans so wide that they cover the black Converse sneakers, a green checked shirt and the classic Beatles hairstyle, which in a soft line covers both forehead and ears.

We are on the set at Lars von Trier’s new feature film THE HOUSE THAT JACK BUILT, which takes place in the 1970’s USA, but is shot in a forest north of Copenhagen. Together with four other locations in the Copenhagen area, this place makes out as the Danish costume designer Manon Rasmussen’s workplace throghout May. Manon has been working with films both domesticly and abroad for 39 years and was last year selected for the American Oscar Academy in the company of, amongst others, the Danish directors Nikolas Winding Refn and Tobias Lindholm. Manon has been a permanent fixture of Lars von Trier’s productions since 1980 and thus the one who has survived the longest, as she puts it.

What is the difference between workig in Denmark and abroad?
“There are quite a few Swedes and Germans on the team behind THE HOUSE THAT JACK BUILT, and my impression is that they love working on a Danish team. Many big international productions typically have a massive crew divided into fixed groups, each managing their own field. But there is a special social cohesion in Danish and especially Lars’ productions with a flat hierarchy, where you help each other, are flexible and willingly cover areas of work that are outside one’s own – it brings a different joy and unity to the set that many international stars and film workers appreciate and are attracted to.”

“On a personal level Lars also is in a better state when he is at home. Being in Denmark creates peace and quiet for him. All these years producing films abroad, money has been the deciding factor – it has previously been impossible to finance the films on Danish soil,” she adds.

As to all the mixed stories about how it is working on a Lars von Trier-production, she sais:

“When I say surviving the longest it is meant in a very positive way. I’m happy every day I go to work on Lars’s productions, he’s a wonderful person. He gives you a chance to push your boundaries. It has given me some opportunities you rarely get elsewhere. Take DOGVILLE as example. 20 of the world’s biggest stars is on a stage without props or scenary. To be responsible for costumes on this kind of project is a great challenge and opportunity, when the costumes must speak for themselves and become an important expression. My selection for the Oscar Academy is without a doubt due to my work on Lars’s film,” Manon sais and continues:

“People in the international film industry have a great deal of respect for Lars’s work, and many will do anything to be on his film. Also the actors love him. He is truly a person, who attracts talent and attention, and has helped put Denmark on the map as a film nation.”

Just as Lars von Trier Manon prefers to work in Denmark, but explains that it is often difficult as more and more Danish productions are shot abroad due to funding.

“I was on A ROYAL AFFAIR and ‘1864’, both of which were shot in Prague even though the stories are taking place in Denmark. There was more financial support in the Czech Republic. I love co-productions with many different nationalities on the team, it’s just hard to travel so much. That’s what’s so great with THE HOUSE THAT JACK BUILT – here we have the opportunity to work with an international team at home in Copenhagen,” she concludes.

It’s the first time since DANCER IN THE DARK (2000), Lars von Trier is shooting an international film in Denmark. Copenhagen Film Fund has contributed with 1.08 million Euros to help make it possible for Zentropa to shoot in Copenhagen. The main cast include Matt Dillon in the lead role, Bruno Ganz, Uma Thurman, Riley Keough, Sofie Gråbøl and Siobhan Fallon Hogan.
After a month of shooting in Western Sweden, the production moved to Copenhagen in May where they will shoot the last scenes.